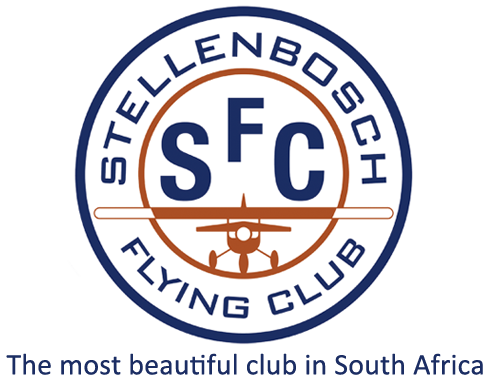 The foundation of the flying club, later to become Stellenbosch Flying Club goes back to 1973, when a group of aviators got together in order to promote private/recreational flying in the Stellenbosch / Somerset West area. They were Brian Arton, Alan Stuart and Artur Albertyn, and started flying from Fisantekraal, an ex-military airfield, 17NM North of Stellenbosch.

Brian was a member of Cape Aero Club, who also had a private landing strip on his farm outside Stellenbosch. He later moved to Australia. Artur was a councilor with Stellenbosch Town Council, and was one of the driving forces behind the acquisition of our current location. Alan Stuart, a South African, joined the Royal Canadian Air Force in the late 1950’s and soloed in a DHC-1 Chipmunk, before moving onto Harvard T33’s, and finally the Canadian CL 13B Sabre. He then returned to South Africa in the early 1970’s and bought a farm in Banhoek (Helshoogte). He returned to Canada in 1978, where he is still residing at present.

At the time, Del Colussi, who was CFI of our club for many years, leased Fisantekraal from the government. Del’s company was registered as Fisantekraal Lugdienste, offering hangarage, fuel and charter flights. He later also operated a small flying school called Boland Vliegskool, flying a Cherokee 140, ZS-FEZ.

Alan Stuart started operating a flying school from Fisantekraal on 1 April 1974, and named it Stellenbosch Flying Club. The first trainer aircraft was a very, very old Cessna C150, registration ZS-DZT, which belonged to a club member, a Dutchman named Jan Lagendyk. Cross-country flying was done with Alan Stuart’s Cessna C172, registration number ZS-CPL. The club office was mobile, in the form of Alan’s VW Kombi. Later that year they moved into an office in Del Colussi’s hangar.

In the same year, 1974, Alan Stuart and Artur Albertyn succeeded in obtaining a lease for land from Stellenbosch Municipality. This property, known to the locals as “Louw se Bos”, was a pine tree plantation situated next to the R 44 between Stellenbosch and Somerset West. By mid winter they started clearing the trees and leveling the area, with the help of a member named Jannie Visser, who was greatly responsible for laying out the grass runway 18/36. At last they were ready to move to their own field. Starting off was not an easy task, as there were no facilities like electricity, water or toilets at this stage. The first structure to be erected was a prefab building, the size of our current smoking room in the clubhouse. This “office” was transported from Fisantekraal on a truck with the help of famous racing driver, Peter Gough, who was also a member of SFC. Alan Stuart assumed the role of CFI, while Artur Albertynbecame the first chairman of Stellenbosch Vliegklub.

Meanwhile, there was a parallel development in our club’s history. In 1974, The University of Stellenbosch initiated an Aviation division on campus under the umbrella of their Sports Faculty. This resulted in the birth of Die Universiteit van Stellenbosch Vliegklub, under the chairmanship of Martin Louw until 1977. The lecture room and base of the flying club was located in the Civil Engineering building at the University, and flying was done at D.F. Malan Airport with an aircraft owned by the University of Cape Town, appropriately registered as ZS-UCT.

This arrangement was obviously a logistical nightmare, and in 1976 the University decided to move the flying club to Fisantekraal. There they were flying three Cherokee 140’s –
ZS-EYL, ZS-PGC and ZS-FEZ. The latter belonging to Del Colussi, who also gave some of the instruction to the student pilots of US. The instructors of US were Fay Bool and Martin Winter, and the very first student to be trained here was Kosie Olivier. He was followed by, amongst others, Herman van der Merwe and Frans “Spyker” Immelman. The club also made use of a Cessna C177 Cardinal, ZS-FXT, which was used as the basis to form their club logo.

In order to alleviate the logistical problems of having two clubs on one field, it was decided that a separate company should be formed. The result was that Stellenbosch Vliegveld Maatskappy was formed, with three delegates from each club elected as Trustees. This company was tasked with the smooth operation, maintenance, fuel, hangarage and general management of the airfield. The first Committee Members of this newly founded company were Chris Von Delft – SFC (Chairman), Bob Ridler – SFC, Frans Immelman – USV, and Johan Swart – USV.

Up to 1983 both clubs were still sharing the use of Stellenbosch Flying Club’s clubhouse (the current Training Centre). The Universiteit van Stellenbosch Vliegklub then decided to look at different options of building a new Club House for themselves. After obtaining a subsidy from Stellenbosch University, and forking out the balance of R 10,000-00 (contributed by members), they started construction in July 1983.

The building, in the form of a DIY kit from NST Construction in Knysna, arrived at Stellenbosch Airfield, and was erected by enthusiastic members. The total mass of the wood was 15,5 tonne, with an additional 3 tonne for the roof tiles. Total cost of the building came to R 26,000-00. The original clubhouse consisted of the present bar area and admin offices upstairs. The front part of the building was only added in 1991.

By 1984 it was obvious to all parties concerned that it would be beneficial to everyone should the two clubs become one. The new club was formed as Universiteit / Stellenbosch Flying Club, and it was agreed that the US logo would be maintained, as it already had the U.S. displayed on it. The first chairman of the amalgamated club was Romain Holemans.

The wooden clubhouse of US was then used as the social centre on the field, while the clubhouse of SFC (current training centre) became the base of the skydiving club. During those years the club did not have a barman and cook like we are having today, and the members took turns to man the bar and they all contributed to make sure that everyone was fed whenever they decided to get together. The club and it’s members were like family, having a special camaraderie amongst themselves, and raised funds continuously for the upgrading of facilities such as the building of the Club Hangar on the northern side. They also received a yearly grant from the Universiteit Stellenbosch.
With over 600 members and 160 aircraft based on the airfield, Stellenbosch has now grown to one of the biggest Flying Clubs in South Africa.
Copyright © 2021 Stellenbosch Flying Club.